Groups of 10+, please call for reservations

Up and over the hills traveling east, leaving the coastal fogbank behind, the world of the wine country baths in warm sunshine. The country route on Highway 3 through La Misión is a fun adventure and the back way into the Guadalupe Valley. It takes the traveler along a plateau and through open pasture land. A turn east heads toward the town of El Porvenir. The road narrows, more like a winding lane with a few surprising unmarked speed bumps. The large blue Ruta de Vino signage begins to pop up pointing the way onto dirt roads cutting through the vineyards, however JC Bravo is an easy right turn off the main road. JC Bravo is one of the oldest of vineyards in the El Porvenir area.

The Hacienda style tasting room immediately sets up a feeling of old Mexico. Lush bushes of bougainvillea splash bright colors framing the building of adobe and graceful arches artfully done with fire brick. Karla Bravo, steps outside in a warm greeting. She is a lovely young woman and the daughter of JC Bravo. She calls her father to begin the tasting and the Bravo family’s story. The two tastings were set on the table and the history unfolded. In 1944, grandfather Bravo bought the land in El Porvenir countryside. Later he considered growing the grape for making wine. He brought the Carignan and Palomino grape from Spain. The idea was to grow and sell these grapes to winemakers. After grandfather died, JC’s father took over the production and when JC was old enough he began to learn the language of the vine. At that time Carignan was a very popular grape for this region as it grew easily and was highly productive. The Palomino, a light-yellow grape, was not as temperamental as the chardonnay for the white wine. 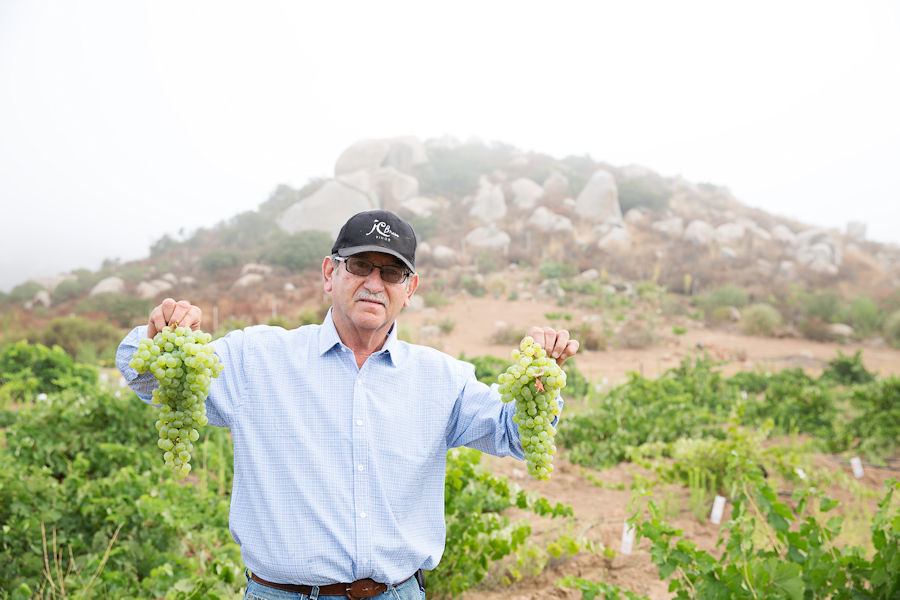 As time went on the market changed with the influx of more wineries and new varietals competing with the traditional. The wine producers now wanted something different, leaving the Bravo family with a vineyard of undesired grapes. JC knew he needed to do something. He was unwilling to rip out the well-established vines and start all over, so in 1999 he signed up at the local wine school to learn how to make wine. Karla proudly brought to the table the first bottle of Carignan they had produced in 2001. Its fading label was a touch of history and now part of the success story.

Slowly, the market began to return to both the Palomino and the Carignan and it was not too long before the Bravo wines were sought after. Both Carignan and the Palomino vineyards now have 45 years in productivity. This is what is called a “temporal vineyard” which, because of the deeply rooted vines, relies exclusively on the amount of rain each year. There is no sacrifice of quality in order to produce more. The whole Bravo family carries on the tradition from the harvest to the bottling. This vineyard “represents a tradition and a culture of Mexico” of which this family is very proud.

Karla offered the Palomino tasting. It was beautifully pale and friendly to the nose with notes of guava, green apple and citrus. It was fresh as springtime and more fun than a chardonnay. It had a surprisingly long finish for a white wine. The word is out and visitors to the region seek out the Palomino from this vintner. Next, Karla poured the 100% Carignan with 12 months in the barrel. First, the color was a sparkling gem and very leggy. The aroma “lifted right out of the glass” and was intense. Clearly it was a promise that was about to be fulfilled with silky rich and round layers of black cherry, pepper and spices. What was startling was the warm glow it instantly produced in the body and a feeling of happiness. I had never heard this attribute claimed by professional wine tasters, but JC nodded knowingly that this was the case. Later, I would check out the JC Bravo Facebook with a review by Jake Flamberg, a Brit with a sense of humor, who created the Wine Folly. In a live feed, Jake tasted the JC Bravo’s Carignan for the first time. With a long inward look, he breaks into a huge grin and exclaims, “This is so good! It is like a British Christmas pudding! It is a happy wine!” He declared, “This is extremely well done… the Mexicans are taking the time to produce world class wine and yes, this is a world class wine.” 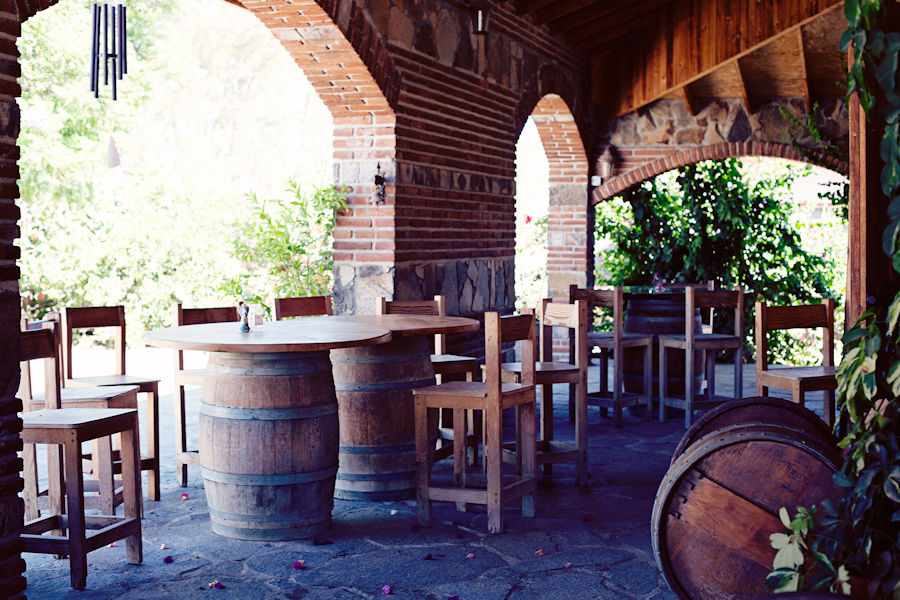 From here Juan Carlos was called back to work. He had been a gracious and warm host. Karla began the tour of the cava. First the fermentation room is what can be consider “old school.” Everything is done by hand from the harvest to the pressing to the fermentation in large open concrete tanks. There is no doubt that the happiness comes from a family working together, tending carefully each step, as if the vines are their children. Karla told of her life and growing up as part of this family. I asked if the greater world did not call to her. With the sweetest smile she said, “I love my job! I love everything about it.” Clearly, Karla will be part of the unfolding Bravo tradition into the future. The tour continued deep into the earth and with each step the temperature dropped where finally it held a perfect constant for storage of wine and fermentation in the barrels. The earthen walls were covered in a wash of adobe; ceiling and walls were finished with fired red brick. The great oak barrels were like great slumbering animals. There was a sense that they were alive and actually that is true. While the grape is no longer in form, the juice in its process of change is full of life. The barrels rest silently. Cardigan is tended for twelve months with time and attention. Each is tested and treated with kind words and encouragement, until the perfect moment to bottle. This creates something undeniable and unique. A magic elixir that offers happiness with each sip. 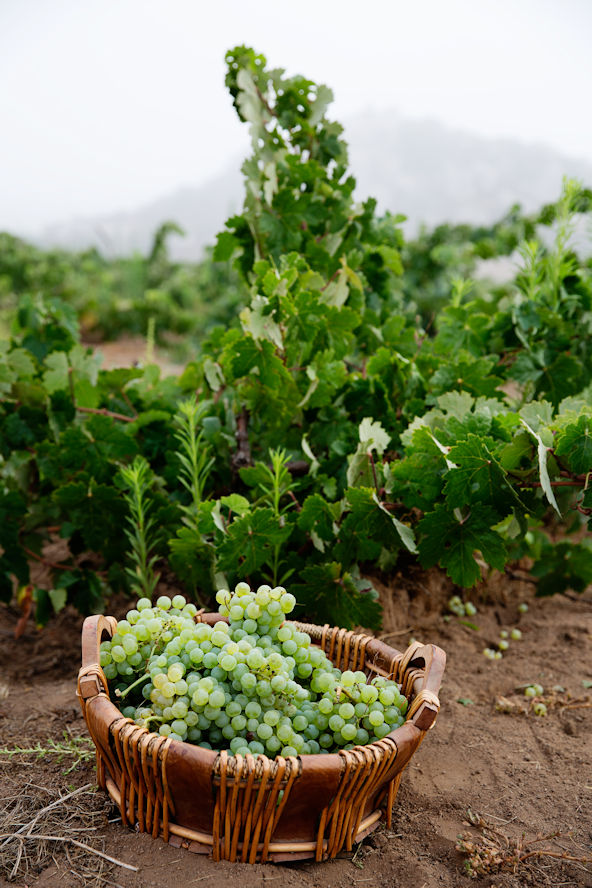 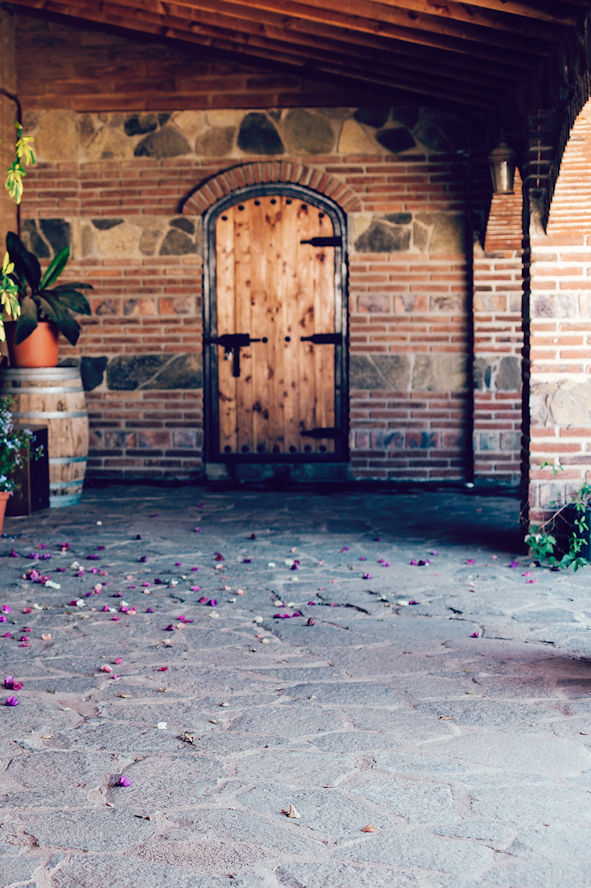