Groups of 10 or more reservation please

Editor's note: This article was researched and written pre-Covid. Enjoy!

While many fine wineries are found with ease on the main roads through the Guadalupe Valley, leaving them and taking a dirt road offers special experiences. En’Kanto is one such destination that is sure to fulfill more than your glass of fine wine. Take the scenic free road past La Fonda and through the historic pueblo of La Misión. It is only another 20 minutes to En’Kanto. Watch for the blue winery signs on the right at a tight curve in the road. Venture onto the dirt road that runs up a slight hill where the pavement begins. Passing Relieve winery on the right, continue down the hill watching for a long second of chain link fence on both sides of the road. Just as they end, turn left on a dirt road. You will see the sign with the winged fairy, En’Kanto’s trademark. The dirt road passes through little ranchos. At a T in the road, you will see the sign pointing the way. Turn left, proceeding up the incline to the tasting room on the left. The rustic patio under the deep shade trees invites you in for a stress free afternoon.

I park beneath lacy pepper trees and I am met by Tom and Eva. I already know from their greeting that this is going to be a special day. First Tom takes me up to see their lodging for special overnight stays. Several Cabañas and one lovely loft casita affords the visitor with beautiful amenities, views of the sunrise over the mountains and mystical moon rises. The night sky shimmers with starlight. Tom points out to the vineyard from the hilltop, “We have traveled the world, and decided to live in Baja California as we very much like the quiet lifestyle here. At first we had not planned to become a winery, but I became fascinated by the idea. I began by going to Escuilita here in El Porvenir. We, along with Cassie our partner, started small and will limit our production to 1200 cases with our focus on quality.” Since very good wine starts with very good grapes, Tom has implemented worm farming to enrich the soil and fertilize the vineyard. Very few wineries are this diligent. Keeping production small allows time for this special detail. Worms will eat up to approximately 8 pounds of organic waste every week. They produce castings which is a very rich plant food. From this Tom brews “worm tea” as a liquid fertilizer. 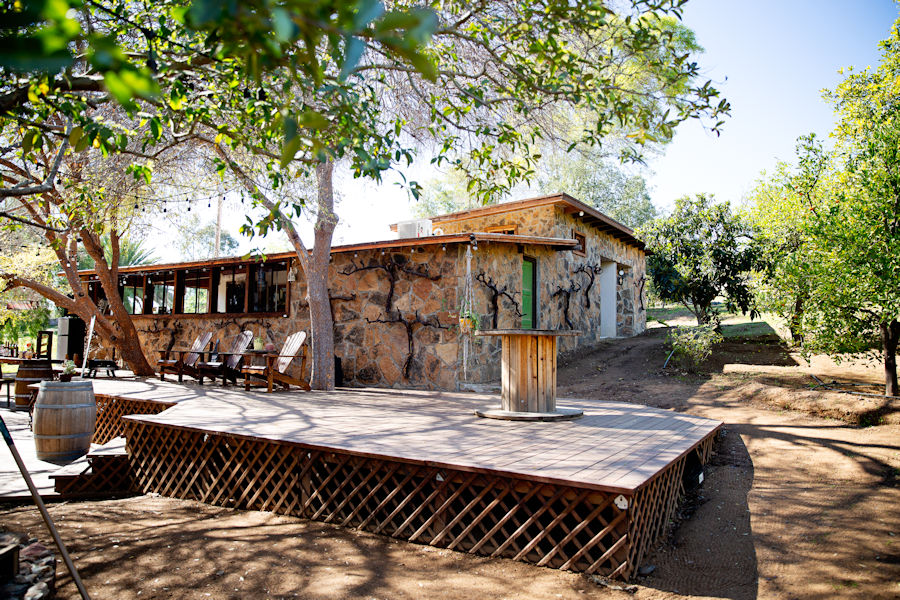 We drive back down the hill with the two camp dogs following close behind, their tongues hanging out trying to keep up. Tom sets up the tastings while Eva brings homemade tapas and cheese to the table. We are joined by Israel Torres, an experienced guide into the wine country, and a lively conversation ensues as always happens when people share their love of wine. Tom pours the first of four tastings. This white wine lives up to its name, Dazzle, and on the label is the lovely fairy sprite with the iridescent blue wings. This 2017 blend of Chardonnay, Chenin Blanc and Viognier does not pass through the barrel. A first taste is fresh with crisp green apple. Dazzle is said to be kissed by the fairies of the En’kanto vineyard. En’Kanto is a way of spelling the Spanish word, Encanto, meaning enchanted.

The conversation turns to what it takes to become a Sommelier; a study of wine and food pairing. An in-depth course is given in Ensenada and both Tom and Israel have taken the course. Israel was animated, “Practice! You have to learn how to distinguish aromas. One of the things that I learned from the course was I needed to practice all of the time. When I go to the market, I pick up all the fruit and vegetables to smell their different aromas.”

Tom presents the 2014 100% Merlot with 14 months in American and French oak. The wings of this fairy turn from orange to deep mauve. Oh, the aroma filled the nose and the robust red fruit filled the mouth with ripe black berries and black currant. It has the smooth tannins of the Merlot. Tom says of this Merlot that it has “attitude.” Tom admits that he likes his reds big and bold. I was curious about the idea of choosing the fairy to represent their wines. Tom shared their vision, “We want to support people in seeing there was more to life than meets the eye. We wanted them to meet the spiritual side of wine that goes beyond the mere quick tasting. To be kissed by the fairies there is more enjoyment in each moment of life.” Spending time with a winemaker and a guide, the conversation goes beyond the ordinary and there is a certain magic that happens in communing over a glass of red with an attitude.

The sunlight filters through the elm tree creating dancing shadows as the afternoon mellows. Surely there is a fairy or two hiding in the leafy branches. Tom pours a 2014 100% Cabernet Sauvignon handpicked from their own vineyard. One year in the barrel lends a wood structure to this full-bodied wine. A touch of vanilla from the oak with a hint of pepper is very nice. Fresh fruit lingers long into a romantic finish. The wings of the Cabernet sprite are deepening shades of purple. Tom shares, “After so many years of actually working in the vineyard, doing the fine pruning as the vines grow, tending to the soil, there was one day I realized it is really all about the vineyard itself. The rest is about letting the wine take me where it wants.” This Cabernet was beyond delicious and Israel could see I was taken with it, saying, “Ah, you have found your match.” And it is like that with the love of wine. It is the wonderful mystery of it all that takes us by surprise.

This was followed by a 2013 100% Nebbiolo with one year in the barrel. This a fully mature fruit with a sublime finish lingering like a kiss you do not want to end. At that moment I’d wish for a creamy dark chocolate pairing with this tasting treat. Our winged creature glowed on the label with rainbow colors. The forth tasting called Enigma was a blend of three grapes a 2016 with two years in the barrel. Tom smiled and said, “It is a mysterious wine, if you don’t know what it is. I almost ruined this one. I lay awake at night and ask myself, ‘What have I done?’” Yet we all agreed restless nights were part of being a good winemaker and that Enigma was a very fine “mistake.” But there is no mistaking a winery well on its way to being a go to destination, enjoying a quiet vineyard atmosphere, and your cup overflowing with the fullness of life. 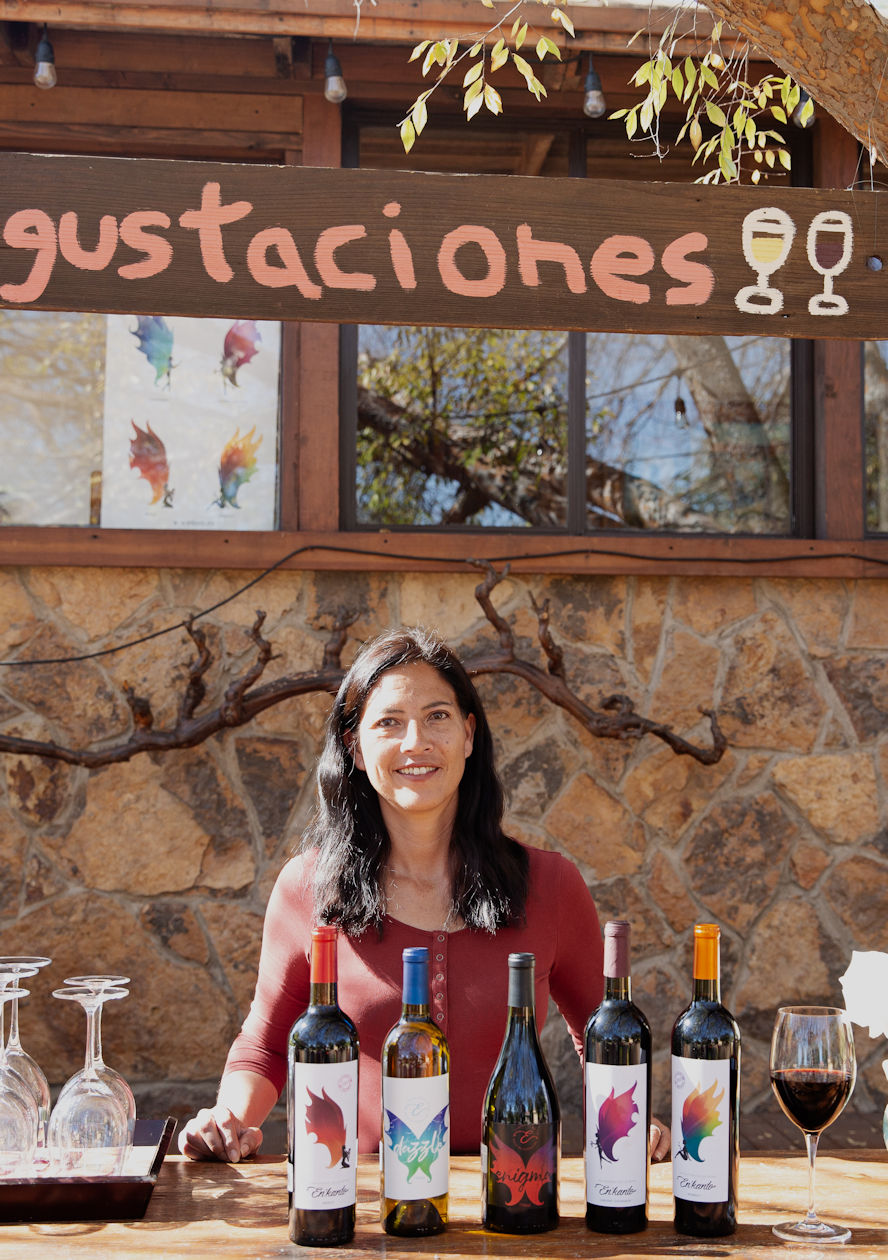 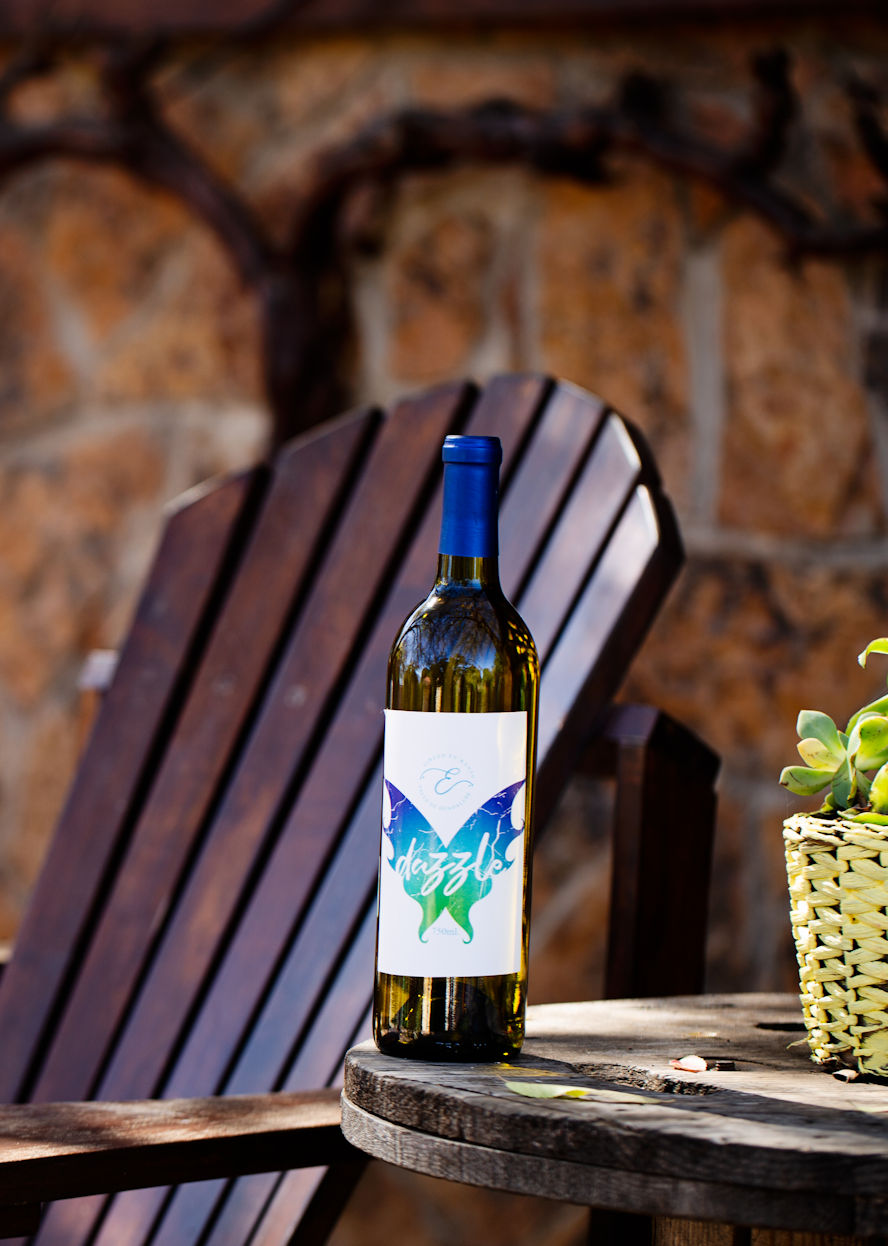