Historic Mulegé is a gem at the gleaming confluence of the Mulegé River and the Gulf of California. Many a person has reported that a stay here has changed his or her life forever. I am one of those people who never could return to what some would call a normal life. I can report that it was a very good thing as I sit here writing overlooking the Bahía Concepción with the amazing sunrise and the river below. I've rented a small house on this hilltop for several weeks, living everyone's idea of the “writer's life” including my own. One last sip of coffee and I am off and away, anticipating a Mulegé adventure.

The sun is just up. The town is beginning to stir in the morning quiet. Shop owners sweeping the sidewalks create gentle shushing sounds, so much preferred over the snarling whine of a leaf blower. I find myself visiting Mission Santa Rosalia, built by Cochimi Indian hands out of natural rock and completed in 1766. The heavy wooden doors are already open for the faithful. I am the sole visitor at this hour. A feeling of ancient solitude permeates the solid stone structure as if the Cochimi Indians still walk barefoot on the cool stones. The hush creates a sense of a holy encounter as I approach the apse. Above the altar is a lifesize statue of a young woman dressed in the brown robe of the peasant. Her face is beatific; her gaze to the heavens. She represents the surrender necessary to become a saint. Rosalia was a young Sicilian girl who lived in the 12th century. She turned from the world of need to live in a cave. She was not heard of again for several hundred years, during the black plague. She appeared to a hunter, saying, "Don't worry, I will protect you and I will protect the city.” She revealed to him the site of the cave in which she had lived as a hermit and told him to go back to Palermo and alert the archbishop and rulers of the city. Following her directions, the hunter did find her bones exactly as she had said. She was granted sainthood for saving the town from being decimated by the plague. The town of Santa Rosalia also bears her name.

Just a few minutes from the mission is the Mulegé Museum. It is a bit of a challenge to get to it. Just past the laundromat off the main street and up a steep grade to a narrow dirt road. The building is a famous structure as it was once the Mulegé prison, a prison without doors. It is true the prisoners were allowed out during the day to work, but had to return on their own at night. One of the many hurricanes that hit this area tore off the original roof. It took several years to repair, but now has a fresh look and new displays. Historic treasures from history have been saved: cactus spines used as needles and fishhooks, carved bone spear points, bows and arrows, deer hide clothing, an especially significant carved wooden canoe. There were actually a few women locked up, separate from the men and their cells were near the kitchen. One wonders what they could have done that was so bad to have sent them to this hill from the tiny fishing village below. Maria, the knowledgeable guide, finishes the tour by blowing the conch shell. It is the sound from the past when life in Mulegé was even more simple than it is today.

The sun takes an afternoon slant and I head out to the gulf along a mile of dirt road to the old lighthouse. I am drawn by the mass of sea birds congregated in one place. At least seven different species are seen in a feathered colony. A mass of noisy terns have come together for the mating season and periodically become a swirl of white wings as they rise excitedly into the sky. A heron poses while patiently waiting for the fish to swim by. The tiniest shore bird picks its way through its miniature rock world during the river's low tide.

Yanette has the special touch and her presentation of chocolates, cakes and cookies show her attention to detail. She brought out the cutest little bunt cake, drizzled with swirls of creamy frosting, carmel loops and chocolate trails. The first heavenly bite called for a second and third. Such a sweet and unique gift this would make, if you could keep yourself from eating it before giving it. A small plate held thin coins of dark chocolate that were amazingly satisfying. It was the little white chocolate hearts that challenged me to go beyond satisfaction.

There is no way for me to drive away without stopping in at El Patrón to say hi to my friends, Lily and her son Victor. El Patrón, right at the water’s edge, is the only restaurant on the beach. It has been torn down by hurricanes over the past five years. Lily refuses to leave and patiently rebuilds the palapa and cultivates her flower gardens. Francisco entertains you from behind the bar and whips up what I consider the best margarita in the area. I sit watching the colors change over the gulf as the sunlight leaves behind the soft silver sea and blue pink sky. 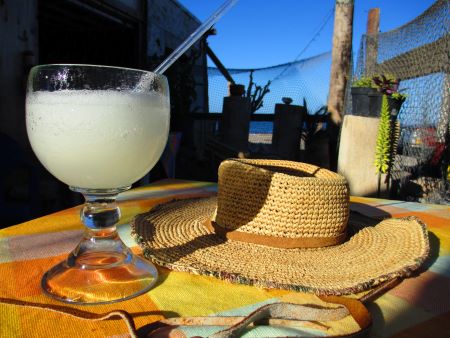