The Hollywood of Baja California Drive into history when Hollywood screen stars walked the streets of Rosarito and worked near a thriving fishing village south of the city. An earlier Mexican president coined the phrase that this area, known as Popotla, was the Hollywood of Baja California. This is an easy destination for an afternoon into the past where award winning movies were filmed. Popotla, is a historic area in itself as it is one of the oldest fishcamps along the coast, but also because a little-known fact has it that Al Capone built a home here during prohibition. Now only a couple of brick walls remain. In 1996 history merged with fantasy when Twentieth Century Fox built a massive 51-acre studio right next door to the fishcamp for their mega production of the Titanic.

Fox Studios is well-known for its blockbuster film, Titanic, and for this they had to build the “infinite horizon” tank that adjoined and overlooked the Pacific. The tank is a 360,000 square foot concrete pool with a full capacity of 17 million gallons of sea water. This amazing undertaking was meant to create the effect of seeing the vast shimmering ocean behind the actors sauntering on the ship’s deck. This required an outdoor tank to accommodate a 775-foot-long replica of the Titanic in the water. In addition to this, there were 3 supplementary water tanks constructed inside sound stages, surrounded by green screens, where the actors could be filmed in many of the water shots as the Titanic began to sink. The infinite horizon tank had a combined volume of over 20 million gallons of filtered sea water with a plant capable of delivering 9,000 gallons of water per minute. 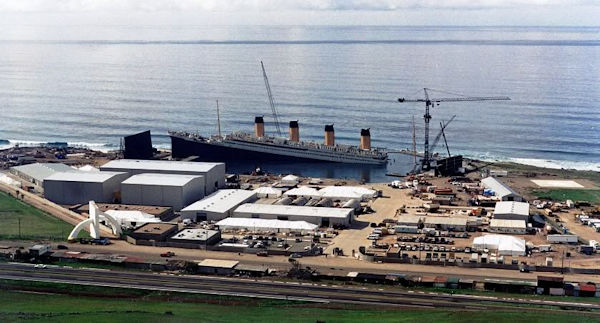 At the turn of the century, Hollywood productions loved filming here in Baja for the less expensive hotels and wonderful food, not to mention the hometown Mexican crews were very skilled and easy to work with. Other films followed, all needing the water tanks: James Bond, Tomorrow Never Dies (1997) with Pierce Brosnan; Pearl Harbor with Ben Affleck; Master and Commander (2003), staring Russell Crowe; The Curse of the Black Pearl (2003) with Johnny Depp and many lesser known. When the productions came to Rosarito, we loved the surprise when one of the stars walked in to a restaurant for a taco and a beer.

With all the famous memorabilia floating around, Fox created Foxploration to showcase their movies. It opened in May of 2001. Guided tours took us onto many of the movie sets and it became a thriving center in a once little-known area of northern Baja. We found it to be great entertainment and a place to have a cup of coffee and a light lunch. On the tours, we were able to fantasize about being in a movie. James Cameron was a stickler for detail with perfect recreation of the Titanic, using only the finest of props. we were taken into the bowels of the great ship, where in the movie, sweat covered men threw coal into the growling maws of the boilers to create steam power. On the tour, however, it was a dark and somber reminder of how ships were powered and the harsh working conditions men endured. We were guided from the darkened set, into a sound stage where a smaller water tank was surrounded by a green screen for close up scenes when people were in the water. Finally, we were given a special state-of-the-art video screening of footage of recent Fox films. Our guide then threw open heavy double doors and we poured out into the sunlight, nearly blinding us. Soon we were sauntering down a street with Victorian homes overlooking the ocean, this had been the set of Little Boy. There were parts of the full-size ships and airplanes that were constructed for Pearl Harbor. These were actually blown up and burned at this very studio. I, along with many other longtime residents, remember a December in 2007 when an explosion rocked the whole community for miles in all directions. A mishandled dynamite blast, meant for special effects, unfortunately killed a young Mexican soldier who was helping with the operation. During this era, hundreds of people living in Baja were awarded parts as extras. Well known Baja adventurer and author, Graham Macintosh, was part of a core group of Titanic extras, called the “steerage class” family. He is easy to spot in the movie, because of his flaming red hair. You can see him in the aftermath shots where bodies are floating face down in the water. Graham recalls, “I hung on to a barrel for a really long time. The water wasn’t cold, but we spent three days in the tank and a few extras complained. Right away, the company brought in hot tubs for us. It was really top notch.” Graham had many small non-speaking parts. He can be seen running upstairs while gunshots were fired. Graham grinned, saying, “I even played a shadow.” In one very demanding scene the historic ship began to upend. It required everyone to hang onto the railing for dear life. “It was pretty scary and one stunt man had to slide down the full length of the deck. He broke his leg in the fall.” Having natural red hair Graham was cast as a drunken Irishman. In a fight scene below deck, he was punched and went down. Getting back up, a woman handed him a full mug of beer. “They were having a lot of trouble with the scene. It just wasn’t playing right. I could see right away what the trouble was and I suggested being handed the beer, carrying the action scene through.” The filming in Baja studio took six months. “All the extras were given a special preview showing in San Diego. When it came to the drunken Irishman scene, everyone cheered.”

Fox sold the studio in May 2007 to Baja Studio for an eight-figure US dollar sum. Unfortunately, a year later a severe economic downturn in the US slowed Baja’s economy to nearly a standstill in the coming years and Foxploration was forced to permanently close. But now the movies are coming back: Little Boy was shot here in 2012. This movie alone brought $14 million into the economy; Robert Redford’s, All is Lost, came in 2013 as a one man against the sea film; Fear of the Walking Dead (season 2) in 2016 had the ghouls walk our streets. Filmmakers from China are finishing up an action film featuring a plane crash. Driving by the studio lot, a full-size passenger plane could be seen as it was lifted by crane above the outdoor tank. A resident of the La Misión was an extra. She, a pixie-like 80-year-old woman who looks 20 years younger, was cast, it is said, because she could scream realistically and apparently, she did a lot of it. Because of a confidentiality clause, she was limited in what she could reveal about her experience. “The movie is called Rescue…About 95% of it was filmed in China before they filmed the final scenes here at Baja Studios. It stars 6 of Chinas most famous and most handsome young actors. They were all over six foot and swoon-worthy. They play the part of first responders, attending major disasters in China when they get the call that a plane has crashed into the sea. They have to put personal issues aside and decide as a group, how to go about rescuing survivors from a sinking plane. It was filmed here because this is the largest tank in the world. The famous director, Dante Lam, was all business and a darling man. He was very kind and complementary to our acting crew. There were about 100 extras. Only 20 survived. I survived, my husband didn’t. The crew were all Chinese. Camera, lights and sound, the waves, plane crashing and other special effects were all done by Chinese experts. It was amazing and I feel very grateful for being a part of this movie. This survivor is a happy camper!”

Today, travelers can see from the road the masts of Jack Sparrow’s, Black Pearl, outlined against the blue of the Pacific. Stopping for a moment and peering through the gate, you can still see the streets of the old sets, airplane parts from Pearl Harbor and quite possibly the next production in full swing. From here, right around the corner and through the colorful arches is the busy fishcamp with a plethora of eateries. Skilled fishermen bring in their daily catch through the surf, and right across the street Polo’s Gallery holds the spirit of the Mexican artist, their work is some of the finest of Baja. Ready, Set, Action! Baja California is full of surprises, frequently transporting you beyond normal reality.